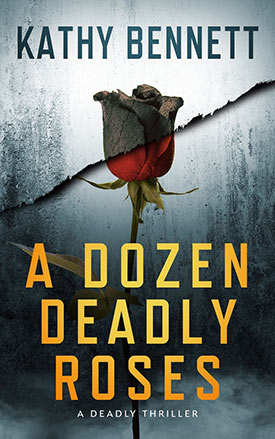 Someone wants her dead…

Police officer Jade Donovan thought life was going well: a sweet four-year-old son, a good job, and a promotion in her future. But things have taken a dangerous turn. She’s being stalked. Hunted. Her predator delivers dead roses to Jade, each time the threats more descriptive, more terrifying. Her one hope is to figure out who wants to kill her before the intimidations become a reality. And the only man she can trust to help is the one man she’s avoided. A man who can destroy her world.

He had nothing to live for…

Former cop Mac Stryker lost everything years ago: his wife, his daughter, and his career, which he drowned with whiskey. Now nearly five years sober, Mac is slowly rebuilding his life. He’s got his badge back and a newfound purpose: to help his partner find the man stalking and threatening her. It’s his job, yes—but there’s more. An attraction to Jade and her sweet son making Mac feel alive again. But will a secret rock Mac’s tenuous hold on sobriety? When the stalker makes his final deadly strike, can Mac forget the past and save Jade and her son? Or will history repeat itself?

The red and blue rotating lights on the police vehicle cast circling shadows in the inky, early-morning darkness of the Los Angeles residential street. In front of the patrol car a battered sedan pulled to the curb.

Probationary officer Jade Donovan dimmed the light bar to a stationary red. Adjusting the spotlight to reflect into the rear view mirror of the violator’s vehicle, she blinded him to the movements inside the police car.

“He’s got a headlight out.”

“You’re waking me up for a burned out headlight? Christ!”

Mac Stryker pulled himself from his slouched position, glanced at the street signs, gave the dispatcher their location and opened the car door.

Jade approached the left side of the stopped vehicle. Looking in the side mirror, she observed the driver: a young male with a shaved head and block letters tattooed on his neck.

He twisted toward her bringing his right arm to window level. A chrome semi-automatic handgun bucked in his hand as he fired several shots in Jade’s direction.

The kid’s head snapped back and he slumped across the center console.

Holding her gun on target, she slowly moved closer to the suspect’s vehicle. The shooter’s super-sized white T-shirt displayed a spreading stain of crimson. A dark divot dimpled the left side of his forehead. His heavily tattooed arms were flung above his head as though anticipating Jade’s next command.

“Let me see your hands!”

The gangster didn’t move. His face presented the slack-muscled tone of a corpse.

Remembering her partner, she glanced to the sidewalk, where academy training had taught her partner should be standing. She saw nothing but empty space. A moment of uncertainty overcame her. Where the hell was Stryker? Had he been shot?

Sirens blared in the distance. Jade held her position, the muzzle of her gun pointed at the suspect. Tires screeched and the odor of burning rubber filled the air. Help had arrived.

The first officers on the scene called to Jade to confirm she was all right. Then they yanked the shooter’s lifeless body from his car and, per Department policy, handcuffed him. Additional arriving officers called for an ambulance.

A baby-faced sergeant placed his hand on Jade’s shoulder. “Officer Donovan, you need to holster your gun.”

Mechanically, Jade obeyed. “I don’t know where my partner is,” she blurted. “I couldn’t see him after the shooting. He may be injured.”

A look of disgust crossed the supervisor’s face.

“He’s fine – for now. We found him sitting on the curb behind your black and white. He smells like a brewery.” The sergeant motioned toward another police vehicle where Jade glimpsed a slumped silhouette – presumably her partner.

“The way it works is I take you back to the station where you meet with the shooting team from Force Investigation Division. They’ll take your statement.”

“What about my partner?”

The sergeant shook his head. “Your Training Officer, Mac Stryker, is royally screwed.”

Jade Donovan clenched her fists at the sight of the gold florist’s box leaning against the front door of her apartment. The delivery taunted her, flaunting the fact her skills as a police officer couldn’t help her catch whoever was leaving the boxes.

“Mama got another present. Can I open it?” Jade’s four-year-old son Donnie eagerly stomped up the stairs to the landing outside their apartment.

“No, honey, I’m sorry. This present is for Mommy only.” She hurried to get to the box before her son, struggling to keep fear and dismay from her voice.

Donnie thrust out his lower lip. “I never get to open any presents.”

“Sweetie, don’t pout,” Jade said, grabbing the foil container. She tucked the package under her arm. The thin cardboard lid gapped, and the musty smell of dead roses invaded her nose. Reaching under her sweater, she pulled a nine-millimeter semi-auto handgun from the holster at her waist. She unlocked the door and entered with her son trailing behind. She set the menacing box on the kitchen table. “Stay in the kitchen, Donnie.”

“Why, Mama? Are bad guys here?” The slight tremble in Donnie’s voice tore at her heart.

“Just do as I say.” She glanced at her son and gave him what she hoped was a reassuring smile. “Everything’s okay, but I need you to stay here,” she said softly.

Holding the gun at a low ready, she purposefully advanced through her two-bedroom apartment. She made quick work of the living room, then inched down the hall.

Whipping open the door to the hall closet, Jade jumped a little as garments moved in the resulting draft. No one hid in the depths of jackets and the vacuum. The bathroom was clear and after checking the bedrooms, including under the beds, she was satisfied no one lurked in her home. She exhaled in relief.

But that relief was short-lived. The fact that each delivery contained one less dead rose was terrorizing. What would happen when there were no flowers left? Whoever was leaving the flowers was serious about intimidating her – and it was working. She returned to the front room.

Donnie had shrugged out of his fire engine red jacket and stood at the forbidden carton. Chubby fingers pushed the cardboard sides of the box in an attempt to see inside.

Jade quickly re-holstered the gun and pulled her sweater back over the weapon.

“Donald Tyler Donovan, get away from that box!”

Donnie jumped and his brown eyes filled with tears. “I wanna see inside.”

“I’ve already told you the package is for Mommy. You wouldn’t like it if I opened your birthday or Christmas presents, would you?”

Donnie shook his head solemnly. “But…I always let you see my presents. You never show me what’s in the pretty gold boxes.”

Jade’s heart crumbled at the hurt in his voice. “I’m sorry, Sweetie. I’d show you what’s inside if I could, but it’s a big girl present.”

“I know, Donnie,” she said, bending down and wrapping her arms around him. “You’re growing up, faster than I can believe.”

Her son hugged her back. “Who’s sending you presents, Mama? Is it your birthday?”

“No, honey, it’s not my birthday. I don’t know who’s leaving the boxes at our door.”

She placed the deceiving carton, wrapped with a blood-red bow, on top of the refrigerator. Wondering if the boxes she received were related to what she’d witnessed a week ago, she shuddered. If her boss, a captain of police, were involved with sending the flowers, the implications were intimidating.

Brushing her hands together as if wiping the cardboard container’s ominous presence away, she turned to her son with a sigh and forced a smile. “Now young man, let’s see what we’ve got for dinner.”

Jade knew one thing for sure. No psycho bastard was going to ruin time with her son.