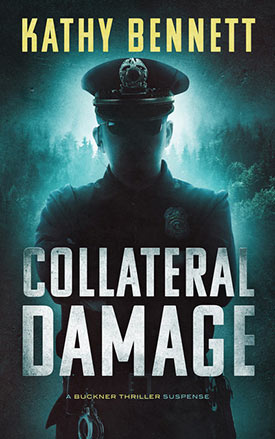 Trapped With A Killer…

Amber Buckner has problems. She’s dealing with her husband’s ultimatum over an unplanned pregnancy. Then, while leaving work she gets kidnapped by an armed lunatic. The psycho takes her to an underground bunker he’d pre-staged for her arrival. She learns her abductor is starved for love—and what affection he doesn’t receive willingly, he takes forcefully. To stay alive, Amber keeps her wits and convinces her captor that he is the father of the child she’s carrying. As the days go by, the maniac fluctuates between love and hate for his captive. Forced to flee the bunker, he and Amber are on the run. She tries to stay one step ahead of her kidnapper until her husband, an LAPD cop, can rescue her. What Amber doesn’t know, is that her husband isn’t looking for her—no one is—the psycho has seen to that.

Seth Farley always dreamed of being a cop. It wasn’t Seth’s fault he screwed up and almost got himself and his training officer, Roy Buckner, killed. All the training officers who’d called him arrogant and untrainable were wrong. It was a conspiracy against him. And now they’d all pay, especially Roy. It was his fault Seth got fired. Roy destroyed Seth’s dreams. And now Seth will destroy Roy’s life, by kidnapping the woman he loves.

From an underground bunker in the Mojave Desert, to a log cabin in Big Bear Lake, Amber is trapped with a killer. Does Amber have the courage and savvy to escape before she and her baby end up as collateral damage in Seth’s plot to exact his twisted vengeance?

The LAPD black and white SUV skidded and stopped amid the hanging stink of burning brakes.

Officer Roy Buckner leaped out the driver’s door and sprinted toward the muscled, tattooed beast driving the pointed toe of his pimp-daddy shoes into the ribs of a motionless working girl splayed on the sidewalk.

The pimp never saw Roy coming. His tackle from behind drove the assailant over the limp woman onto the gravel-strewn driveway of the Blue Cloud Motel.

“Call an RA for the victim,” Roy said.

Farley keyed the mic on his shirt and requested a rescue ambulance for the girl on the ground.

“Get this guy on his feet, searched, and into the black and white,” Roy added. “Then get an FI on him.” Roy stood and brushed the gravel from his uniform.

Farley shot Roy a look of annoyance, then assisted the pimp to a standing position and walked him over to their patrol car.

A sergeant arrived, and he and Roy squatted next to the victim and tried to get a story from the near-unconscious hooker.

Roy rose. “She’s too loopy or high to tell us anything worthwhile.”

The sergeant pushed himself to his feet. “Maybe the docs at the hospital can wake her up enough to tell you what instigated this ass whoopin’.”

Roy nodded. “Hey, Sarge, FYI, I tackled the suspect to get him off the broad.”

The sergeant sighed and said he’d meet them at the station later for the use of force reports. “I wish I had a hundred bucks for every hour I spend on paperwork. I’d retire next year.” The paperwork was necessary to cover Roy’s ass in case their arrestee made an excessive force complaint. Still grumbling the supervisor left.

The fallen woman moaned, opened her eyes, and cried that she hurt all over.

Roy knelt next to her. “An ambulance is coming. They’ll take good care of you.” He requested another unit to accompany their victim to the hospital. He and Farley would interview her after they booked the pimp for assault.

While Roy talked, he kept his eyes on his rookie partner, who filled out a Field Interview card while the suspect sat in the back of the police car.

Unlike most probationary officers, Farley wore the old-school wool uniform instead of the lightweight and cooler poly blend. The tailored shirt and pants accentuated the fact the new officer was no stranger to the gym. The gleaming leather gear, shiny badge, and high and tight haircut came right out of a recruitment poster. Farley looked high speed, but his first two months on the street had proven problematic for the former army GI.

The new cop had already been through two other training officers who’d found his job performance unsatisfactory. He’d made boneheaded mistakes, and instead of owning them, he’d argued with his training officers. If Seth Farley was going to make it off probation, Roy was his final hope.

In general, Farley struggled with police work—while thinking he knew it all—known in cop talk as being salty. His demeanor rubbed cops and citizens the wrong way.

Roy comforted the injured woman as the RA arrived. He’d found her ID in her purse and gave it to the paramedics. She was only seventeen. Roy asked which hospital they were taking her to so he and Farley could interview her later.

The other police unit arrived, and the female partner climbed into the back of the ambulance to ride with the victim. The paramedics placed the girl on a gurney and loaded her into the RA.

By the time Roy returned and got into their vehicle, his partner was checking emails on his cell phone.

“You searched him and double locked the cuffs, right? We wouldn’t want his bracelets to tighten up around his wrists.”

Farley sighed and stuffed his phone into his shirt pocket. “Yes, sir.”

In the rearview mirror, Roy watched the ambulance make a U-turn toward Mercy Community Hospital. He maneuvered the police car away from the curb and headed to Van Nuys station where their arrestee would be booked.

After a few minutes, Roy eased the black and white to a stop for a red light. Seconds later, a shot rang out.